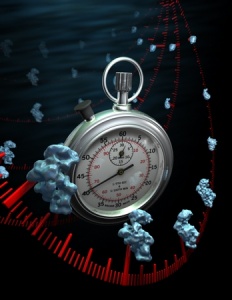 The bacterial ribosome is made up of two subunits (50S and 30S) that together comprise 55 proteins and three large ribosomal RNAs. Both subunits self-assemble from their components in vitro, and hence, Mulder et al., Science, Vol 330, p. 673 were able to use a derivation of time-resolved electron microscopy to monitor assembly of the 30S subunit. This approach identified 14 distinct assembly intermediates and allowed characterization of the population, conformation, and protein composition of the intermediates along the assembly pathway. Image courtesy of Gabe Lander.