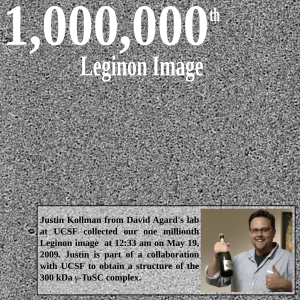 Justin Kollman from David Agard’s lab at UCSF collected our one millionth image at 12:33 am on May 19, 2009. Justin is part of a collaboration with UCSF to obtain a high-resolution structure of a 300 kDa of the γ-TuSC complex.

The first Leginon II image was collected on August 11, 2003 at 3:30pm. So, it has taken us almost 6 years to collect one million images, but the next million should go much faster at our current pace of 700 images per day.